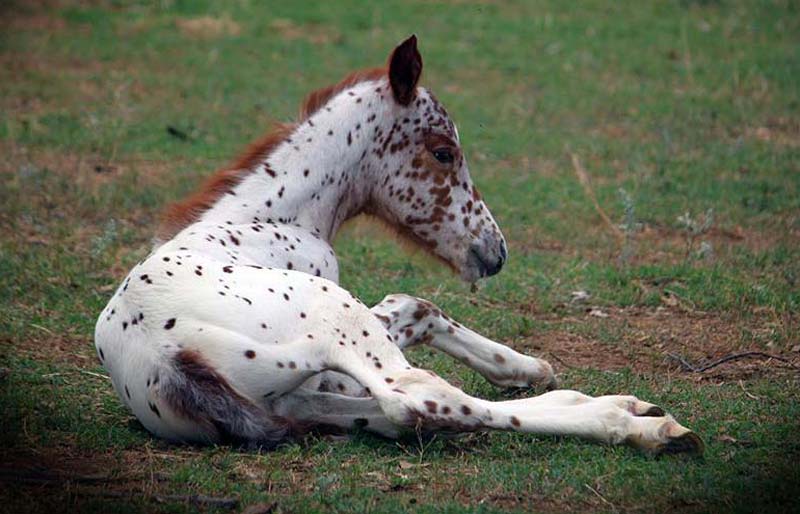 With its user-friendly nature, versatile conformation and unique look, a Sportaloosa is a horse to aspire to own. You'll love owning and riding a Sportaloosa and you'll never lose him in a crowd.

His coat pattern and characteristics (white sclera around the eye, mottled skin and striped hooves) give him an exclusive identity that sets him apart in a sea of plain bay, chestnut and black horses. They make him easy to recognise and, because of his athletic qualities and easy to deal with nature, let him build up a great reputation as an excellent riding horse.

Tipping the odds of appaloosa colour in your favour

Listen closely and you’ll hear words like these from the mouths of experienced Appaloosa breeders. Is it true though? We’d like to let you in on a secret... luck has nothing to do with it. With a little effort and attention, you’ll find you can consistently produce a well-marked Sportaloosa. The trick is to know the chances of producing colour from every match you make.

Why does the coat pattern matter?
Before you read on, we have four quick questions for you to answer.

Question one - is this a Hereford?

Question two - is this a Belted Galloway?

Question three - is this a taxi?

Question four - what drink is in this can?

We’re willing to bet you got every one of these answers right. What’s more, we’ll bet you knew the answers without really having to think about them.

That’s because you know what Herefords and Belted Galloways look like and how their appearance sets them apart from other breeds of cattle. You know that a TAXI sign is the difference between a taxi and a private car and you know what kind of drink is in a can with the Coca Cola logo on it.

Coke isn’t popular because of its logo but because of the way it tastes. Once you know you like it, its logo and appearance makes it easy for you to identify it, so you can buy it again.

As riders, handlers and breeders, people favour Sportaloosas because of their ability, versatility and calm temperament as well as their appearance. When they’re in the market for another horse, the Sportaloosa’s coat pattern makes them easy to identify. Take that coat pattern away and the likelihood of people ending up with another breed of horse is significantly increased.

As a result of this strict selection, Herefords have become homozygous for the genes that control their body colour and white patterning. That is, they have two identical copies of those genes. Every cow inherits one copy of each gene from their father and one from their mother. If either the father or mother, or both have two identical copies of the genes that control the red body colour and white face then no matter which copy of the gene they pass on to their offspring, it will be a copy that dictates the offspring will have a red body and white face.

When it comes to producing appaloosa patterning, breeding practice since the 1960s has made producing a predictable coat pattern difficult. Breeders have crossed horses with varying patterns, or no pattern as well as including crosses to breeds that do not have a coat pattern. Because they haven’t rigidly selected for a particular pattern (or even a particular type of horse) the majority of horses within the current day Appaloosa gene pool have a 25% chance at best of reproducing their own coat pattern.

In practical terms, that means that the odds are you could make the same cross 4 times and get what you hope for just once. That’s caused the lucky dip belief that many of us have; we make a cross, hope for a coat pattern and say “that’s Appaloosas” when we don’t get it. Select the right horses to cross over several generations and it’s a very different story.

Here’s how it works
Two things govern the coat pattern of the Sportaloosa. The first is a pattern gene and there are likely to be several of these. Pattern genes produce a blanket or a leopard coat pattern. The second is the ‘appaloosa’ gene (known as the Lp or Leopard Complex gene) which controls Appaloosa characteristics: sclera around the eyes, mottled skin, striped hooves and some white in the coat to show off any coat pattern that exists.

To have a coat pattern, a Sportaloosa must have at least 1 copy of the Lp gene and one pattern gene.

A visual guide to an Appaloosa’s genetic makeup 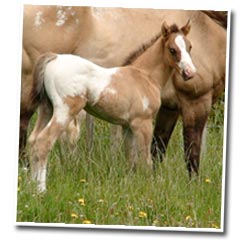 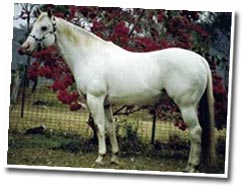 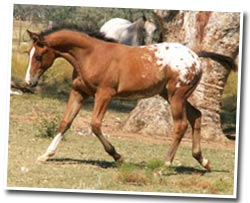 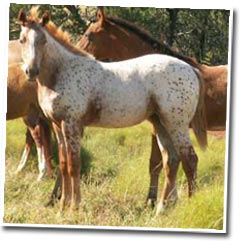 Heterozygous and no pattern gene 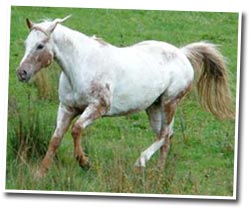 1 copy of Lp + no pattern = varnish roan
Determining whether a roan only horse has one or two copies of Lp can be a challenge. The horse shown here has one Quarter Horse parent so can only be heterozygous for Lp.

One copy of Lp X no copies of Lp

Two copies of Lp X one copy of Lp

You can see from these diagrams that when one of your breeding pair has 2 copies of Lp, you’re guaranteed some form of appaloosa colour. That’s because, no matter which copy of the Lp gene is passed to the offspring, it’s a copy that will produce characteristics and white in the coat, to show off any pattern that is present.

Your riskiest choice is breeding a horse with spots (one copy of Lp) to a horse that has no copies of Lp. This cross gives you only a 50% chance that the offspring will inherit Lp.

The second part of the equation - the pattern
In order for the offspring to have a visible coat pattern rather than just characteristics and some roaning, it must also have inherited a pattern gene. Without a pattern gene, the horse that inherits Lp will have white sclera, striped hooves, mottled skin and some degree of roaning at most. At worst, there may be only the most subtle indications that Lp is present.

The majority of patterned horses within the appaloosa gene pool are only heterozygous (have just 1 copy) of the gene that produced their coat pattern. That’s because horses of the same coat pattern haven’t been consistently bred together and it means that they can pass on a pattern gene only 50% of the time.

Use horses that have patterned ancestors for at least 4-5 generations in your breeding programme. The more consistently bred they have been, the greater your chances that they have developed homozygosity for pattern genes in addition to the Lp gene.

If outcrossing or breeding to a solid coloured Sportaloosa, make sure one of your breeding pair carries 2 copies of Lp so that the foal will inherit one. Most of all, remember how important the coat pattern is to the Sportaloosa and work hard to keep the colour!

For in depth information about appaloosa coat patterns as well as the science behind the spots, we recommend joining The Appaloosa Project. They offer the world's most indepth educational web site on appaloosa patterning and associated traits as well as the opportunity to pose questions to their researchers via their electronic classroom. It's money very well spent and is highly recommended. 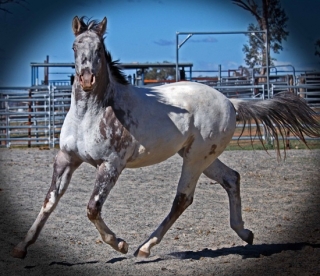